What Is the Difference Between Raynaud’s Disease and Raynaud’s Phenomenon? 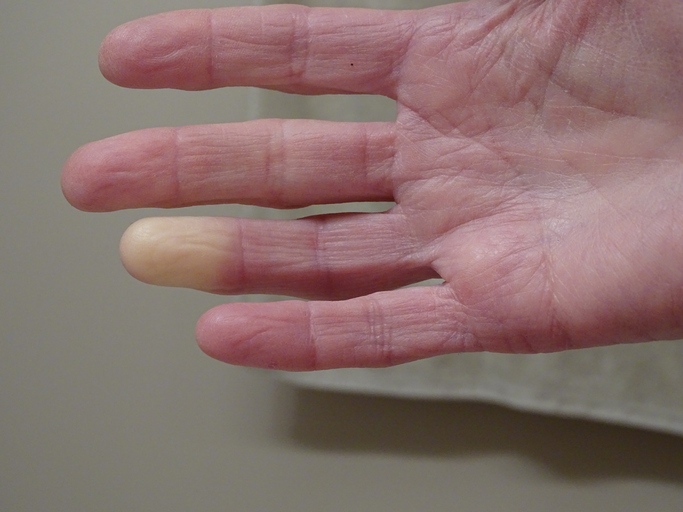 Raynaud’s is a rare condition that affects the blood vessels, usually in the fingers and toes. The blood vessels narrow, or vasospasm, when stress is experienced or the fingers or toes are exposed to cold temperatures. This narrowing of the vessels prevents blood from reaching the affected area, making the skin appear white and blue.

When dealing with Raynaud’s, even a brief or minimal temperature change can lead to an attack. For example, reaching into a freezer can cause the fingers to turn white.

During an attack of Raynaud’s, symptoms include, but are not limited to, the following:

When a Raynaud’s attack ceases, and blood returns to the area, burning, throbbing, tingling, numbness, and swelling of the affected area may occur.

Raynaud’s most commonly affects the fingers and toes; however, in rare cases, it can affect the nose, ears, lips or nipples. Attacks typically start in one finger or toe and travel to other fingers or toes. Attacks generally last approximately 15 minutes but can occur for less than a minute or for several hours.

The causes of primary and secondary Raynaud’s differ.

The cause of primary Raynaud’s disease is unknown. However, symptoms occur as a result of brief episodes of vasospasm, which is a narrowing of the blood vessels. This reduces blood flow to the affected area, resulting in the area feeling cold and numb and changing color to white or blue.

Secondary Raynaud’s occurs as a result of an underlying disease or condition. Causes include, but are not limited to, the following:

Risk factors include, but are not limited to, the following:

Risk factors include, but are not limited to, the following:

Did you find this helpful?
Topics
Raynaud's DiseaseRaynaud's PhenomenonArthritisPain by ConditionPain
You may also like