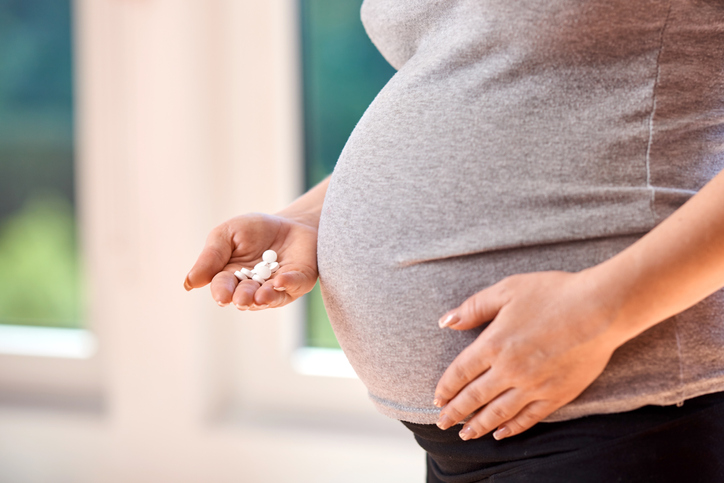 Acetaminophen at the standard dosage is generally considered safe during all stages of pregnancy; however, it is important to note that studies show that daily use of acetaminophen for an extended period (28 days or longer) during the second trimester of pregnancy increases the likelihood of wheezing or asthma in the child.

Some studies show that taking NSAIDs, such as ibuprofen, aspirin, and naproxen, during the first trimester of pregnancy increases the risk of miscarriage. They should be completely avoided during the last trimester due to an increased risk of premature closure of the blood vessels in the developing baby's heart, which induces high blood pressure in the baby's lungs. NSAIDs can also reduce the level of amniotic fluid that surrounds the baby, making it more difficult for the mother to go into labor. While more research is needed to conclusively prove these medications are a direct cause of these issues, NSAIDs should never be taken during the last trimester (the last 3 months of pregnancy). If a physician approves the use of over-the-counter pain medications during pregnancy, women should take the lowest effective dose for the least amount of time possible.

Opioid use during pregnancy increases the odds of heart problems in the child. Taking pain medication during pregnancy also increases the chance of premature birth, preterm labor, and stillbirth. When a pregnant woman exposes her developing baby to opioids, the baby can be born addicted to the medication. The child will experience withdrawal [neonatal abstinence syndrome (NAS)]. The symptoms of NAS are severe; the baby may be born too small or with underdeveloped lungs.

The U.S. Food and Drug Administration (FDA) claims that during each trimester of pregnancy, approximately 6% of pregnant women in the United States are exposed to opioids. If a woman is taking an opioid and becomes pregnant, a health care professional will most likely decrease the medication slowly rather than advising the mother to abruptly stop taking it. Sudden cessation of opioids while pregnant could harm both the mother's and baby's health.

Did you find this helpful?
Topics
Pregnancy & ParentingPregnancyCoping on a Daily BasisLiving with Chronic Pain
You may also like