What Is Kinesiology Tape? 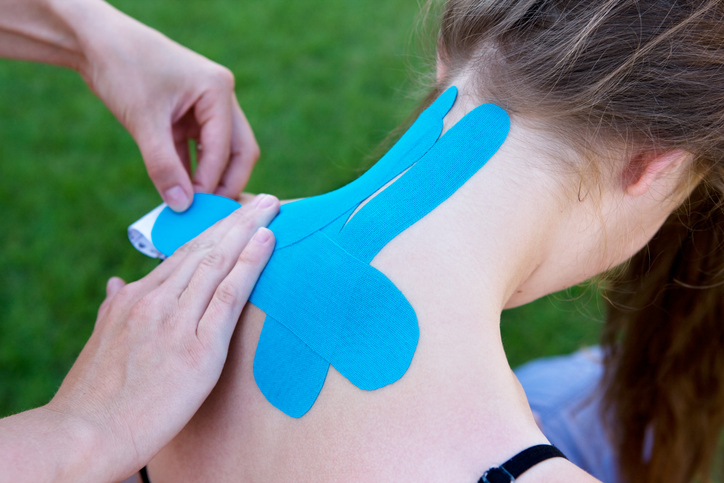 Kinesiology tape is a therapeutic tool created in the late 1970s by a Japanese chiropractor, Dr. Kenzo Kase. It is a stretchy, adhesive tape that is designed to move with the body rather than restricting it. It is usually used in the sporting arena for the prevention and treatment of various sports injuries. The use of kinesiology tape aims to provide support, alleviate pain, reduce inflammation, improve athletic performance and accelerate healing. The effectiveness of kinesiology tape is up for debate. Although many people tout its various benefits, more research needs to be done to verify its effectiveness.

When strategically placed on the skin, kinesiology tape lifts the upper layers of the skin to create more space between the dermis and muscle, which relieves pressure on the lymph channels. This allows for improved lymph flow and drainage. The space between the dermis and muscle also contains various nerve receptors that can be compressed during injuries. Kinesiology tape helps relieve compression by lifting the upper layers of skin. The use of kinesiology tape may also help with deeper tissues in the body. Creating more space for muscles to contract allows more fluid to be pushed through the muscles, which can reduce muscle fatigue and increase range of motion.

Kinesiology taping involves six basic techniques, which are referred to as corrections. These six corrections aim to do the following:

The possible benefits of using kinesiology tape include, but are not limited to, the following:

When not to use kinesiology tape

Kinesiology tape should not be used under certain circumstances. These include, but are not limited to, the following:

Did you find this helpful?
Topics
Physical TherapyTreatments
You may also like

Physical therapy can help restore movement and function for pain patients disabled by injury or disease. Therapy should be tailored to a patient’s condition and pain level. Physical therapy treatments may include a combination of stretching, strengthening, and aerobic conditioning.
learn more