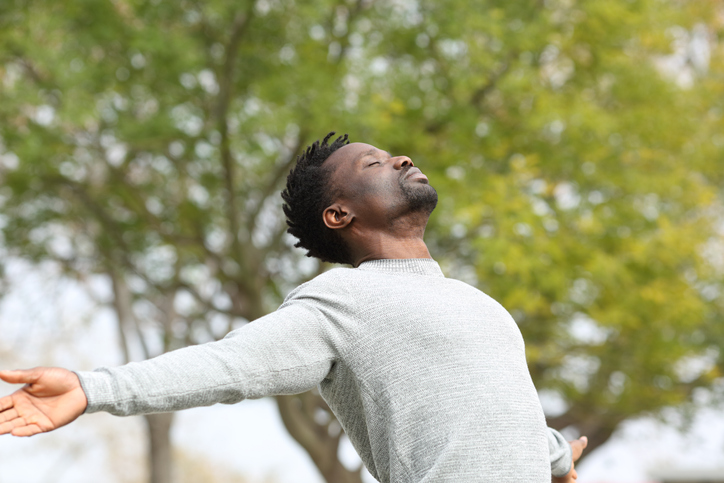 Stress can increase inflammation in the body, which worsens chronic pain. Stress also increases the perception of pain. Deep breathing exercises help reduce stress and promote relaxation, which, in turn, reduces pain. Practicing deep breathing techniques can be especially helpful for individuals with chronic pain; when pain flares up, individuals tend to hold their breath or take fast, shallow breaths, which increases anxiety and pain levels.

What is deep breathing (diaphragmatic breathing)?

When beginning the practice of deep breathing, it’s easier to identify if the belly is expanding and deflating from a reclined position. One hand should be placed on the abdomen and one hand on the chest. The hand on the abdomen should move up while inhaling and down while exhaling. The hand on the chest should stay still. When the practice becomes second nature, deep breathing can be done in any position (i.e., standing, sitting, etc.) without others even noticing.

Examples of deep breathing techniques that may be beneficial for individuals with chronic pain include 4-7-8 breathing, foursquare breathing, and equal breathing. Although these techniques are very similar, there are slight differences among them.

Deep breathing may feel peculiar at first. Dizziness may occur until the body becomes accustomed to the technique. Practicing deep breathing in a quiet, dimly lit environment provides the best results. Although this is not necessary, focus is more easily maintained in this setting, especially when new to the practice. As the body becomes accustomed to deep breathing, practicing it for ten minutes three times per day for at least two weeks may help reduce pain.

Did you find this helpful?
Topics
Chronic Pain StrategiesCoping on a Daily BasisLiving with Chronic Pain
You may also like

Coping involves a conscious effort to solve a problem in order to master, minimize or reduce its impact. Coping strategies can help individuals with chronic pain deal with their pain on a daily basis. However, they should not be confused with treatments. Coping skills aid in pain management...
learn more