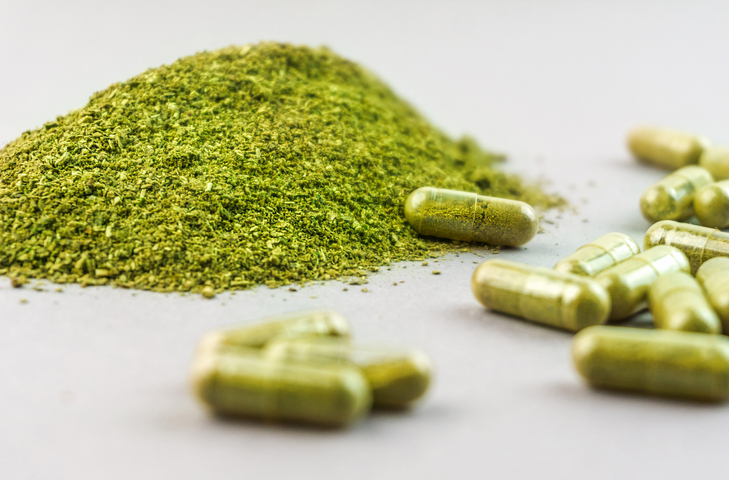 Kratom, Mitragyna speciosa, is a botanical product from a tropical evergreen tree in the coffee family that is found in Southeast Asia. It grows naturally in countries such as Thailand, Malaysia, Indonesia and Papua New Guinea. It is often sold as a dietary supplement for its stimulant and pain relieving properties. Kratom leaves can be chewed or brewed into a tea. They can also be ground into a powder, which dissolves in drinks, or put into capsules, resins or patches.

How is kratom used for pain management?

The two chemicals in kratom, mitragynine and 7-hydroxymitragynine, have a strong effect on the body’s main opioid receptor, mu receptor. This is the same receptor that is stimulated by any pain medication, such as oxycodone. Currently, there are no FDA approved uses of kratom (source 4), so individuals who use it are self-treating. Individuals currently use kratom for chronic or acute pain, mood disorders, anxiety, insomnia, and opioid use disorder or withdrawal.

What are the benefits and risks of using kratom?

The main benefit of kratom is pain relief. Even though kratom acts on opioid receptors in the brain in the same way as opioids, it does not appear to have the same respiratory depression or constipation that can come with opioid medication.

Kratom does have several potential side effects, including tachycardia, drowsiness and vomiting. It can even cause seizures and respiratory or cardiac arrest. Kratom can also be addictive. Some users experience withdrawal or require addiction treatment after long-term use.

Other risks involved in kratom use include the lack of control or regulation over the growth, processing and packaging of kratom. Clinical trials have not been conducted to study kratom’s safety or effectiveness.

What is the legal status of kratom in the United States?

According to the U.S. Drug Enforcement Agency, kratom is a “drug of concern” but has not been labeled as a controlled substance. In 2014, the U.S. Food and Drug Administration made it illegal to import or manufacture kratom as a dietary supplement. However, it is still legal to purchase it for “aromatherapy purposes” in all but six states and some individual cities, where it has been completely banned.

What is the legal status of kratom in Canada?

It is illegal in Canada to sell any health care products without the authorization of Health Canada. Kratom is not authorized for sale as a consumable natural health product in Canada. Health Canada advises individuals not to swallow or inhale products labeled as containing kratom as it could lead to serious side effects, such as heart or liver issues. Kratom is legal for sale if not being sold as a consumable; therefore, some retail and online stores are marketing kratom powder, whole leaf, or stem as incense or aromatherapy. Health Canada is working with the Canada Border Services Agency to stop kratom products from entering Canada.

More research into the uses of kratom, regulation of its production and education for users is needed in the future. Individuals who are considering using kratom should discuss it with their health care team, including their pharmacist. They should also research the legal status of kratom where they live.

Did you find this helpful?
Topics
SupplementsAlternative MedicinesTreatments
You may also like

The use of supplements in treating chronic pain has increased as more research has been conducted to show the efficacy of supplements and as individuals have become more health conscious and look for more natural ways to treat their pain.
learn more