What Is Diabetes Insipidus (DI)? 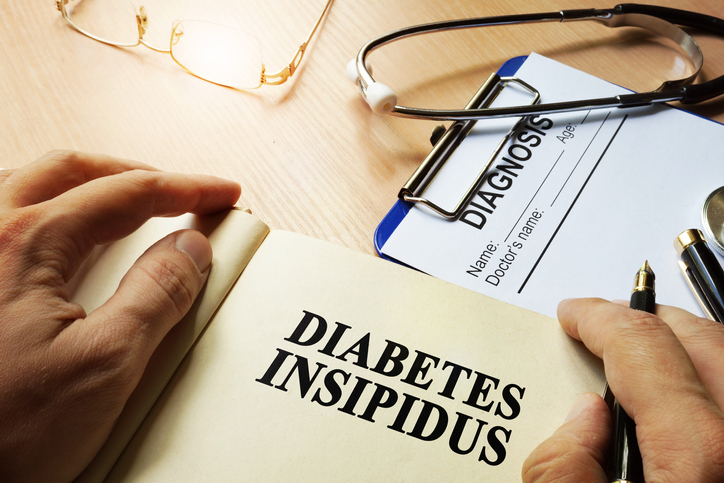 Diabetes insipidus (DI) is a rare medical condition that causes an imbalance of fluids in the body, resulting in extreme thirst and excessive urination. While most people urinate between 1 and 2 quarts daily, those with DI can pass as much as 20 quarts of urine per day. The excreted urine is heavily diluted, making it colorless and odorless. It is estimated that only one in every 25,000 people are diagnosed with DI.

How diabetes insipidus works in the body

The hypothalamus (a region of the brain) makes a hormone called vasopressin, or antidiuretic hormone (ADH), which is stored in the pituitary gland at the base of the brain; this hormone helps manage how quickly or slowly fluids are excreted from the body. The kidneys filter and remove fluids from the bloodstream several times per day; the fluid waste is stored in the bladder until urination occurs. ADH tells the kidneys how much water to maintain in the body. Diabetes insipidus occurs when the body doesn’t produce enough ADH, or the kidneys fail to respond to ADH. Either way, the kidneys are unable to retain water. Even when dehydrated, excessive urine is excreted from the body.

Depending on the type, diabetes insipidus can develop for a variety of reasons, including but not limited to, the following:

There are four types of diabetes insipidus:

Symptoms of diabetes insipidus include, but are not limited to, the following:

Factors that increase the risk of developing diabetes insipidus include, but are not limited to, the following: