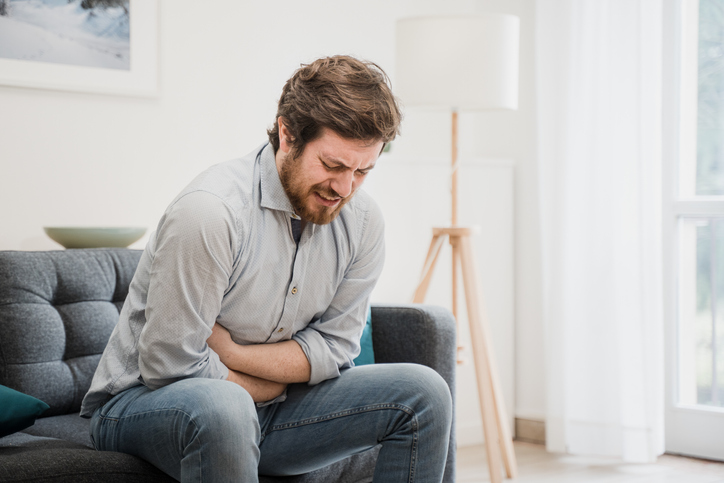 Abdominal pain involves any pain that occurs below the chest and above the pelvic area. Because the abdomen contains a number of major organs, pinpointing a cause can be difficult. Possible causes of abdominal pain include the following:

​Constipation is one of the most common causes of abdominal pain in the U.S. It involves passing hard, dry bowel movements or passing stool less than three times a week.

Diarrhea involves loose, watery stools accompanied by the frequent need to have a bowel movement.

Viral gastroenteritis, also known as the stomach flu, causes inflammation of the stomach and intestines. It is caused by a variety of viruses, such as norovirus, rotavirus, adenovirus and astrovirus, and is highly contagious. Symptoms include nausea, diarrhea, fever, and body aches. It can last from one to 10 days.

Crohn's disease is a type of inflammatory bowel disease. Crohn's disease most commonly occurs in the small intestine and the colon, but it can affect any part of the gastrointestinal (GI) tract. Symptoms of Crohn's can worsen over time. The most common symptoms are diarrhea, abdominal cramps, blood in the stool, fever, fatigue, loss of appetite, weight loss, feeling as if the bowels aren’t empty after a bowel movement, and feeling a frequent need to move the bowels.

Lactose intolerance involves the inability to break down a type of natural sugar known as lactose. Lactose is most commonly found in dairy products. When the small intestine doesn’t produce enough of the enzyme lactase, which is responsible for breaking down lactose, a person becomes lactose intolerant. Symptoms, such as gas, bloating and diarrhea, typically occur 30 minutes to two hours after ingesting dairy products containing lactose.

Celiac disease involves an immune reaction to gluten (a protein found in wheat, barley and rye). It can cause diarrhea, fatigue, weight loss, bloating and anemia.

Gall bladder stones are caused by too much cholesterol in the bile of the gallbladder. Gallstones lead to pain in the upper right quadrant of the abdomen. Symptoms include nausea, vomiting, dark urine, clay-colored stools, stomach pain, belching, diarrhea and indigestion. Symptoms often worsen after eating high-fat foods.

Kidney stones are solid crystals made of minerals and salts that typically develop in the kidneys but can develop anywhere in the urinary tract. A kidney stone causes severe pain that radiates to the lower abdomen before it enters the ureter to pass. Symptoms include blood in the urine, vomiting, nausea, discolored or foul-smelling urine, chills, fever, frequent need to urinate, and urinating small amounts at a time.

A kidney infection is a type of urinary tract infection that typically starts in the urethra or bladder and travels to one or both of the kidneys. This requires prompt medical care as bacteria can travel to the bloodstream, causing a life-threatening infection. Symptoms include back, flank, groin or abdominal pain; fever; chills; frequent urination; persistent urge to urinate; burning during urination; nausea and vomiting; pus or blood in the urine; and foul-smelling, cloudy urine.

A hernia occurs when an organ or bodily tissue pushes through a weak spot in the surrounding muscle or connective tissue (fascia). The most common symptom is a visible bulge in the affected area. Other symptoms include pressure, coughing, heartburn, difficulty swallowing, shooting pain, vomiting and constipation. A hernia requires medical intervention so organs do not become infected, blocked or strangled.

There are 4 types of abdominal hernias:

Endometriosis occurs when tissue that should line the inside of the uterus grows outside the uterus and still acts as it should during menstrual cycles. The tissue still breaks apart and bleeds, but the blood has no place to go, causing the surrounding areas to become inflamed and swollen. Scar tissue and lesions often develop. There may be no symptoms at all, but when symptoms do occur, they include abdominal cramps, back pain, severe menstrual cramps, painful bowel movements, painful urination, abnormal menstrual cycles, heavy bleeding during menstruation, painful sex, and difficulty becoming pregnant.

Appendicitis is an inflammation of the appendix. It is a medical emergency that requires surgical intervention to remove the appendix. Appendicitis can occur due to a bodily infection or a blockage of feces, a foreign body or cancer. Common symptoms include pain near navel that travels to the lower right abdomen, loss of appetite, nausea and vomiting soon after abdominal pain starts, swollen abdomen, fever, and the inability to pass gas.

Diverticulitis is an infection or inflammation of pouches (diverticula) that can form in the intestines. Diverticula cause weak spots in the intestinal wall and balloon outward. Diverticulitis occurs when the diverticula become inflamed or infected. Symptoms include cramping on the left side of the abdomen that eases after passing gas or having a bowel movement, bright red blood in stools, severe abdominal pain, and fever.

Food poisoning occurs after eating or drinking something contaminated with certain bacteria, viruses, parasites or chemicals. It can cause diarrhea, vomiting, fever, abdominal pain and cramping.

Ulcers of the stomach are painful sores that develop in the stomach lining. They occur when the thick layer of mucus that lines the stomach is thinned, typically due to an infection of Helicobacter pylori (H. pylori) or long-term use of anti-inflammatory drugs (NSAIDS). When the protective mucus is thinned, the digestive acids in the stomach can eat away at the tissues that line the stomach, causing an ulcer. Common symptoms include a burning sensation in the middle of the abdomen (between the chest and naval), loss of appetite due to pain, nausea or vomiting, bloating, feeling full quickly, belching, acid reflux, heartburn, weight loss, anemia, dark tarry stools, and vomit that resembles coffee grounds.

An intestinal obstruction occurs when the intestines become fully or partially blocked in one or more places; it is a potentially serious condition. When an obstruction occurs, food and drink cannot pass through the body. This condition requires immediate treatment. Symptoms include severe abdominal pain, cramps, bloating, nausea, vomiting, diarrhea, constipation, foul breath, inability to pass gas, distended or swollen abdomen, and loud noises emanating from the abdomen.

Gastritis involves an inflammation of the protective lining of the stomach. Symptoms include nausea, vomiting, full feeling in the upper abdomen (usually after eating), indigestion, black tarry stools and vomiting blood. The different types of gastritis include the following:

Peritonitis is an inflammation of the peritoneum, the silk-like membrane that lines the abdominal wall and covers the organs. This condition is usually caused by a bacterial or fungal infection. Common symptoms and signs include abdominal pain, bloating, abdominal distention, fever, nausea, vomiting, loss of appetite, diarrhea, low urine output, thirst, constipation, fatigue, and inability to pass gas.

Pancreatitis is an acute or chronic condition that occurs when digestive enzymes mistakenly begin digesting the pancreas itself, leading to inflammation. Common symptoms include severe pain in the upper abdomen, nausea, vomiting, weight loss and oily stools.

Did you find this helpful?
Topics
Abdominal PainPain LocationPain
You may also like

A pain pump is surgically implanted device designed to deliver medication directly to the spinal cord reducing the dosage required for pain relief, and limiting the side effects of oral medication. Pain pumps interrupt pain signals to the brain and are used when oral medications and other...
learn more