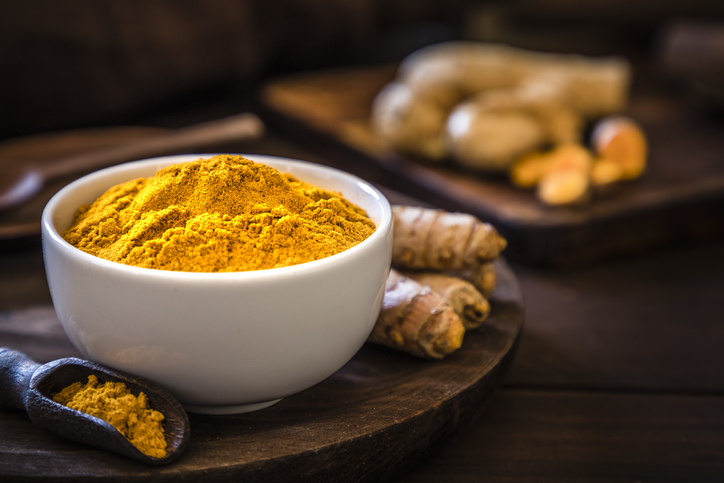 Turmeric is a perennial plant that produces dull yellow flowers and is a member of the ginger plant family. It has a warm bitter taste and is the main spice used in curry; it is also used to color certain foods, such as mustard, butter, and cheese.

Turmeric contains the chemical curcumin which decreases inflammation and is a solid antioxidant. Antioxidants protect the body from free radicals, because of these qualities, turmeric is often used as a nutritional supplement.

Short-term inflammation plays an important role in the body because the inflammation process fights harmful bacteria; however, long-term inflammation tends to attack the body's own tissue. Curcumin, found in turmeric, is a powerful anti-inflammatory and boosts antioxidants in the body. Reduced inflammation and proper oxidation in the body reduce the risk of both heart disease and Alzheimer's disease. Curcumin also reduces the risk of certain cancers. Additionally, curcumin is sometimes more beneficial than anti-inflammatory medications for those suffering from rheumatoid arthritis. Curcumin has also been proven to be an effective antidepressant.

Turmeric supplements are usually safe and typically do not cause any significant side effects. Some people have reported abnormal heart rhythm, nausea, dizziness, and/or diarrhea. Turmeric is safe while pregnant and breastfeeding if consumed via food sources; however, if taken in a supplement form, it can stimulate the uterus and cause menstruation.

The therapeutic dosage of turmeric depends on the condition being treated. It is important to use a turmeric supplement with Piperine as it enhances curcumin absorption. As with any medication, vitamin, or herb supplement, a thorough evaluation should be performed by a health care professional before taking a turmeric supplement.

Did you find this helpful?
Topics
SupplementsAlternative MedicinesTreatments
You may also like

The use of supplements in treating chronic pain has increased as more research has been conducted to show the efficacy of supplements and as individuals have become more health conscious and look for more natural ways to treat their pain.
learn more